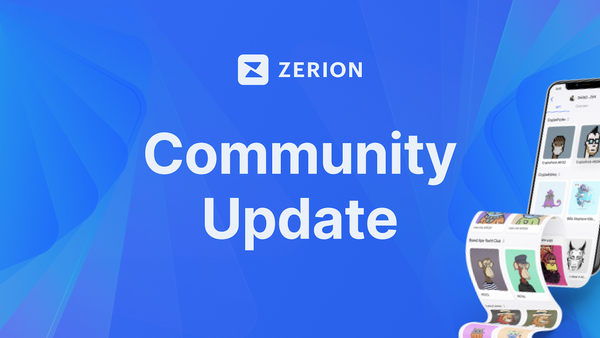 Did you see that Zerion raised $12.3m Series B? The goal is to build the best wallet for Web3 citizens.

Our mission from the very beginning has been to empower YOU — Web3 builders, traders, and enthusiasts — with user-friendly and intelligent products that help you take control of your identities, data & assets.

Now, this vision attracted the Wintermute team and other world-class partners to join our mission.

You can read more about the state of Zerion and future plans in the blog post and on Twitter.

It’s in your DNA

It pays to hold a Zerion DNA and evolve with every transaction.

Similar to ENS, Unstoppable Domains are NFT domain names. You can use them to host decentralized websites with IFPS or just as human-readable handles for your wallet address instead of a random string that starts with 0x. UD's Senior Vice President Sandy Carter also shared lots of other UD use cases on Zerion’s Web3 Wednesdays.

In Zerion, you can now search an address by Unstoppable Domain and use it to send crypto, just like with ENS or Lens:

And to celebrate this integration, Unstoppable Domains gave $50 credits to holders of Zerion DNA with at least Level 2 traits.

If you missed that, don't despair. We’re planning more cool stuff for Zerion DNA holders. You can prepare for that by leveling up your Zerion DNA. To do that you need to (1) hold Zerion DNA in a Zerion Wallet and (2) do some transactions, ideally trade with Zerion swap.

Did you know that you can also import your MetaMask into Zerion Wallet?

After that, you can mint (or transfer) Zerion DNA and see it change as you make transactions.

In October, we welcomed some amazing guests to Web3 Wednesdays, Zerion’s own Twitter Space.

Among them was Jbeezy from Lido. He spoke about the future of liquid staking on Ethereum, explained how Lido’s ETH staking works, and share lots of alpha.

We also heard from some of the most prominent builders of Regenerative Finance aka ReFi. It’s all about building on top of DeFi to fund public goods, price in negative externalities, and generally make the world a better place. Johnx from Toucan Protocol, Ben West from GitCoin, and Douglas Qian from Spirals Protocol tuned in to share their stories.

Twitter isn’t the only place where live Zerion hangouts are happening. In our Discord, we host Zerion Connect calls — recently we heard from Ceres DAO about Web3 portfolio management.

To make sure you don’t miss any Zerion events, add the Zerion community calendar to your calendar app.

This week, some Zers are in Lisbon, Portugal, and San Francisco. Those are the two hubs where all the Web3 action is happening now. If you want to meet up, drop a message in Discord and we’ll try to find each other.

And can you keep a secret? There is a Zerion Alpha Leak party in Lisbon this Friday, November 4th. But we didn’t tell you this.

Last but not least, we are cooking up some exciting new developer features. Want to be the first to hear about our upcoming REST API release? Sign up for the waiting list now.

How to Import Your MetaMask into Zerion Wallet

Aave Interest-Bearing Tokens: How to Lend Crypto in a Few Taps

Here’s what we’ve been up to 🚀

Here’s what we’ve been up to 🚀